Our 2021 Commencement student speakers on finding ID, their time here, and what the future holds

Tommie Collins came from graphic design. Justin Bartkus was a theologist. Sze Wing Alpha Wong originally studied urban planning. Though their backgrounds are different, one thing that these three Commencement student speakers share is a desire to make the world better—and they recognized graduate study in design as the way to accomplish that shared goal. Read on about how they found the Institute of Design, what they did here, and where they're going next. 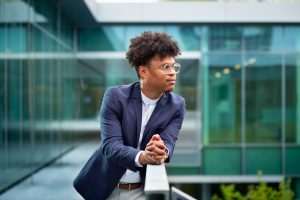 Tommie Collins’s plan was never to stay in his native Chicago; instead, he dreamed of being an architect on either the East Coast or the West Coast. But during his undergraduate years at Hampton University in Hampton, Virginia, Collins’s perspective changed.

“I realized there was a great opportunity to come back to Chicago and be the change I wanted to see,” says Collins. “So often, people become frustrated with their circumstances and they leave it for someone else to resolve or figure out. I thought it was time to break that cycle.”

Following his undergraduate program, Collins worked in graphic design, but after a few years, he began to see its limitations. Deciding to further his education, he found ID, the only design school offering a dual degree in business and design at the time. But it also offered Collins a platform to explore design as a means for making change.

“My mom is an educator and my father is a retired social worker, and I was trying to figure out how the hell did I get into design, what the parallel there was,” says Collins. “I realized that the common thread between those three things is that they’re people-centered. They’re about helping people become the best version of themselves and providing access to things they might not have access to.”

While at ID, Collins learned of the design tool that would help him make the change he wanted to see: co-design, a method of designing that gives stakeholders more agency in the creation of design solutions, ensuring that the final product meets their needs.

Co-design is really about shifting power dynamics. With co-design I shift from being the expert to a learner. And the folks who have a need—the people who are trying to shift things—they become the experts, and I am gleaning from them. I think that’s important and validating for them.

Following graduation, Collins will work at ChiByDesign, a human-centered design firm founded by ID faculty member Chris Rudd. Long term, though, Collins hopes to apply his design skills to opening a fine and performing arts school in Chicago’s Englewood neighborhood, as well as an entrepreneurial incubator.

“There’s a void when it comes to the fine and performing arts, and that’s such an essential part of my community. I want to bring that back there,” says Collins. “And I think there are so many businesses on the South and West sides of the city that, if they had some extra support to expand and grow, they could.” 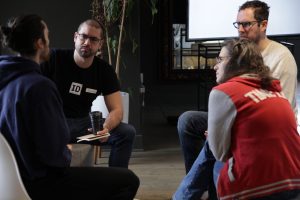 Before he came to ID, Justin Bartkus was on his way to receiving a PhD in theology, a culmination of years of studying spirituality. His shift to ID came from a desire to remove himself from the rigidity of traditional academia. Today, he recognizes the pivot as being unexpected—and he also makes a good argument that the worlds of theology and design aren’t as different as they might seem.

“In terms of the subject material, being ministerial, being educational, being really human-oriented, and being concerned with really deep questions, I didn't pivot away from any of that; all of that came with me,” says Bartkus. “I didn't realize it would come with me as much as it did, but in design you are researching and working with people often, so you have to be very empathetic, you have to be very open, and you have to be aware of your own biases.”

What drew Bartkus to ID was a hands-on approach to creating positive change, “a 180-degree turn from the theoretical world of academics,” as he puts it. Even though he was unfamiliar with design methods at the beginning of his time at ID—he notes being flummoxed by terms such as “facilitation methods” and “systems theory” at the time—he could see the positive outcomes they brought to the table.

What I love about design and ID is that we are not shy about saying we're here to address all the biggest stuff, whether it's climate, racism, [or] humanizing technology and making our economy work better for people. What I’ve learned at ID is that design is essentially focused creativity on a given goal, and that goal does not come from design—it comes from your conscience, your activism, your spirituality. 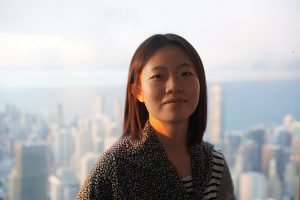 Sze Wing Alpha Wong has always had a passion for making things. She’s the type of person to modify clothing that she buys online, rather than returning it if it doesn’t fit right. She spent her childhood playing with materials and objects, transforming and customizing the imperfect into something valuable and unique.

Even if, by her own admission, those things were bound for the trash can not long afterward, the practice of creation helped Wong see things in a new way. And having devoured Kenya Hana’s book Designing Design, she came to love the process of design as much as the final product itself.

Wong’s time in urban planning studies reinforced her decision to get a master’s degree in design. As she puts it: “I found myself leaning toward design and using my own way of thinking instead of one that asks me to memorize only one way.”

Though Wong knew she wanted to design, she didn’t know exactly what she wanted to specialize in. Her belief in making a path of her own directed her to ID, which provided flexibility and a great variety of perspectives and design approaches. In the first semester of her program, she enrolled in an introduction course that completely shifted her opinion on design.

That was a moment that I knew I came to the right place. I wasn’t the only one questioning, and that was a great encouragement for me to continue to challenge orthodoxies and change the future.

Among all the courses taken at ID, making connections between business and design is what captivated Wong the most. Eventually, though, she hopes to apply her skills toward sustainability.

“To me, design is not just about the well-being of individuals and society,” says Wong. “In broader terms, I think it can contribute to the resilience of the planet and the economy as a whole.”