ID students won the 2022 Rotman Design Challenge, a prestigious global competition organized by the University of Toronto’s Rotman School of Management that brings together top talent from leading business and design schools to propose solutions to complex business challenges. ID students have placed first several times since the challenge was introduced, and came in second place last year.

This year’s sponsor, Dublin-based SMBC Aviation Capital, an aircraft leasing company, asked how designers might reimagine its current business model so that it would continue to succeed commercially while also helping the industry to decarbonize.

Our idea addresses a direct and timely need of airlines. While some of the larger legacy airlines are making sizable investments in carbon reduction technology, most airlines are not capitalized to do so. Smaller airlines are highly exposed to market forces, and emissions offsets will become very costly as mandatory decarbonization phases in.

By investing today through our consortium, we can protect the industry against some of that inflation, as well as provide a healthy return for our original investors.

Getting up to speed

The looming threat of climate change and impending regulations have spurred positive change in the airline industry. But the technology necessary for truly greener aviation—such as electric and hydrogen planes, as well as sustainable jet fuel—is at least two decades from commercial application. Carbon offsetting has emerged as the de facto, albeit imperfect, solution for most global carriers in the near term.

Most large legacy airlines have already developed robust carbon offset programs. But low-cost carriers (LCC) are another, increasingly important, story. Eighty-two percent of passenger growth in the next five years is expected to happen with LCCs, but these carriers have been slow to embrace the concept of carbon offsetting. There are several reasons, including staffing and scaling challenges. Add to this that offsetting itself is not without controversy, and there is fierce competition for a dwindling supply of carbon reduction projects as businesses of all industries race to meet net-zero targets in the next decade.

For LCCs, the clock is ticking. The United Nations framework adopted by 85 countries, including the U.S., known as CORSIA— short for the Carbon Offsetting and Reduction Scheme for International Aviation—moves from voluntary pilot to mandatory adoption in just five years.

A greener aviation industry will require investment, innovation, disruption, and collaboration. And that’s just what a group of ID students has designed: a carbon offset investment fund created for LCCs. 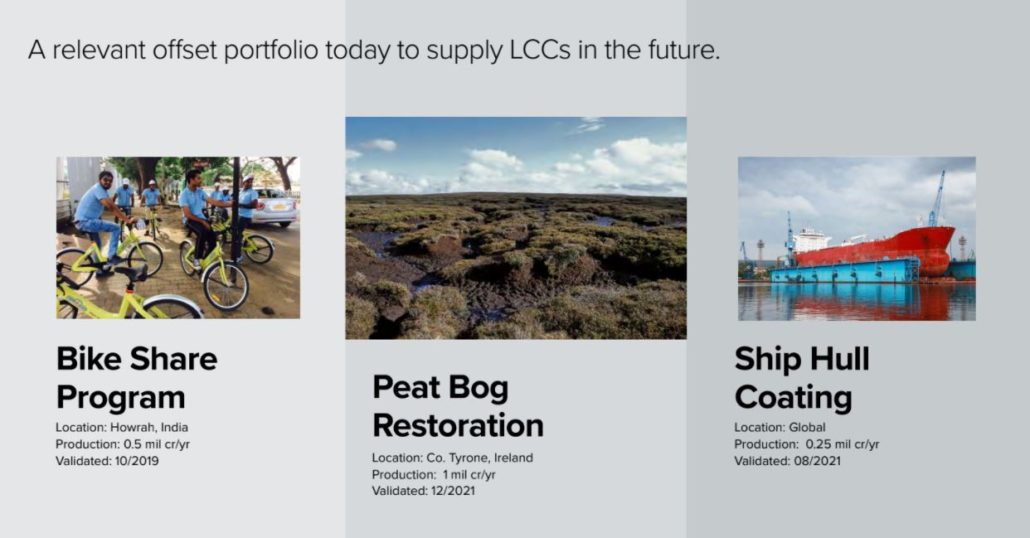 Built with a group that includes SMBC, its parent bank, and experts in the offset market, the fund would consist of high-quality offsets with relevance to the airline industry that remove rather than simply abate carbon emissions.

To supplement these projects, the students borrowed a concept called “insets.” Insets have been modeled in electric vehicle industries in the form of credits captured from charging stations, but the ID team’s proposal marks the first effort to bring the concept to the aviation industry. These insets would be derived from the ground up within the airline supply chain. The credits include rewards for investing in fuel efficiency technologies in the aviation industry and advancing the production of sustainable aviation fuel.

The potential return isn’t just fewer emissions; there is serious money to be made. Assembled between now and 2027 with investments made at today’s carbon prices, which are expected to increase 15-fold by 2030, the fund could return significant capital to the consortium. Students estimate that a $547 million investment could yield $1.5 billion in return by 2036. 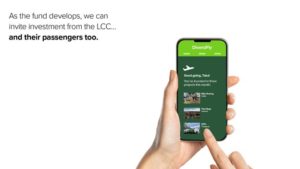 The fund would also be open to the LCCs to whom SMBC leases planes, as well as other airlines that will be subject to mandatory carbon reductions for international flights beginning in 2027.  The airlines could enter the fund by buying offsets and retiring them, buying offsets and holding, or buying offsets and passing them through to consumers. For this last option, the students imagined a passenger-facing platform called “Diversifly” in partnership with an investing application. Passengers would be invited to help fund offset projects through micro-investments of as little as $5 per purchased ticket. Unlike traditional offsetting, which passengers have been slow to embrace because of the sensitivities of ticket price fluctuations, the offset investment could appreciate, and passengers would see the benefit. Frequent fliers could, over time, build a sizable stake in the investment fund.

The Diversifly investment platform would also be the first of its kind, facilitating a shift in how airlines approach offsetting with passengers. Diversifly is ultimately a B2B2C solution that solves the immediate carbon reduction needs of SMBC airline customers, while also helping the airline address a major sticking point with its passengers: the pass-through of carbon offsets with ticket purchases.

In all, the ID students’ proposal aims to reduce foreseeable turbulence in the LCC sector while also supporting the business needs of the client. The benefit to the LCC is clear as well. Fund investors will have protection from carbon credit price volatility, access to carbon offsetting projects that have direct aviation industry relevance, and positive PR stories to encourage new passengers and increase current passenger loyalty.