Challenge: How Can a Major Urban Economy Support More Varied Ways of Making?

In its push to reinvent its economy for the 21st century, Chicago has focused support on emergent innovation spaces. Such spaces focus on coworking and start ups, digital manufacturing, and digital fabrication. These initiatives, however, are often disconnected from the specific needs and concerns of low-wage workers who seek to improve their lives, economic security, and working conditions. So how might Chicago’s economy in the so-called Fourth Industrial Revolution evolve to support more diverse modes of making and manufacturing in the future? And how might principles of social and economic justice be embedded into these complex economic systems?

Chicago at a Crossroads

IIT Institute of Design sought to map and understand the ecosystem of making and manufacturing in Chicago’s economy in a project called “Made in Chicago.” The project team sought to explore thorny questions facing Chicago as it reimagines its approach to making.  Some view technology as responsible for inequalities created between less-educated workers, whose jobs are being transformed and, sometimes, completely automated, by computers. This trend pushes formerly middle-class workers to low-wage jobs. Others view rising inequalities as the work of economic policy, as policy steers what is possible in industry, and thus steers the realities of industry, technology, and workers.1 Chicago is at the crossroads of industrial supply chains, situated at the center of shipping, rail, road, and air infrastructure. Because of this, Chicago supports a concentrated, diverse manufacturing ecosystem, making it an ideal environment in which to explore a range of approaches to rethinking manufacturing and making in a major urban center. 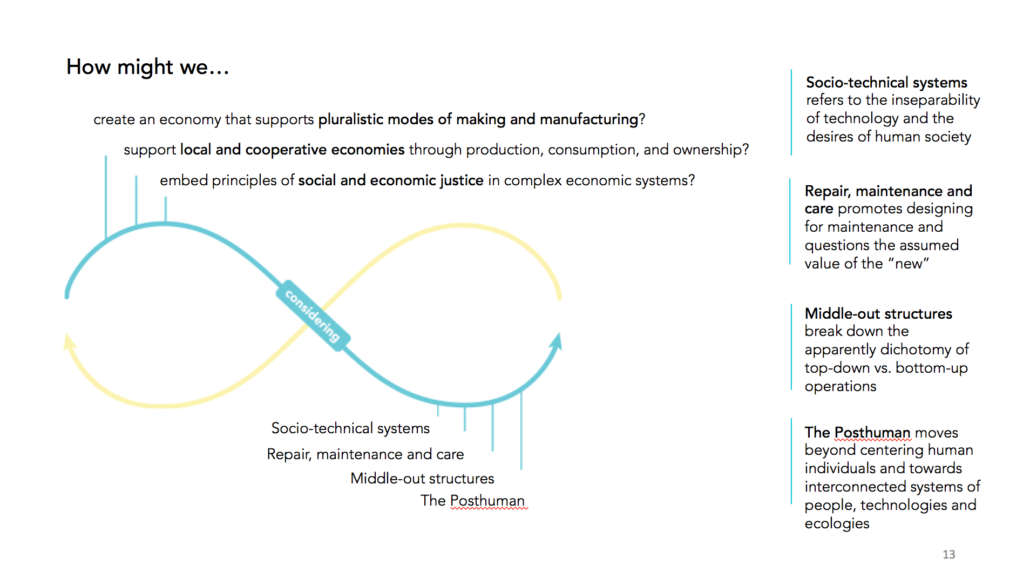 As part of the Sister City relationship between Chicago and Milan, this project began through an institutional partnership between IIT Institute of Design (ID) and Milan Polytechnic. Over the course of a year, Associate Professor Laura Forlano and a team of design students approached these questions. They used qualitative research and design methods such as secondary research, ethnographic observations and qualitative interviews, in addition to participatory design workshops in order to engage a range of stakeholders.

The goal was to develop design interventions—from preferable futures to high impact solutions—intended to inform future prototypes and experiments, creating new models to support the development of a diverse, local cooperative economy around making and manufacturing.

Based on insights from our research and workshops, the researchers developed three key themes for recommendations.

The team’s research revealed several opportunities to support long-term preferable futures that could transform local making and manufacturing in Chicago. They proposed a “living laboratory” for experiments in more diverse, cooperative local economies including:

We also developed short-term solutions that have a high potential to support local making and manufacturing.

While Chicago shares some concerns with cities worldwide, there are also opportunities to expand and experiment with alternative models.

1 Forlano, Laura, Maggie Corser, Patricia Jerido, and Bill Vandenburg. 2015. “Is This The End Of Jobs As We Know Them?”. The U.S. Programs Future Of Work Inquiry. The Open Society Foundations. https://www.opensocietyfoundations.org/voices/ end-jobs-we-know-them.